I have been printing some tee shirts, inspired by the events in Lewisham in 1977.

On the 13th August 1977 the National Front, a far right organisation of the day , with ties to other neo-nazi groups had arranged a rally in the culturally diverse London Borough of Lewisham. It is estimated that around 4000 people from the community as well as anti fascist groups turned out to resist them.

I think that it’s really important to remember the struggles and solidarity of our past , especially these days; with fascism creeping upon us and contention driving apart groups with common interests…

The leader of the NF at the time, Martin Webster has been quoted as saying –

“The sheer presence of the ANL (Anti Nazi League) had made it impossible to get NF members on the streets, had dashed recruitment and cut away at their vote.”

If there was any doubt of the efficacy of anti-fascist resistance!

So, I designed this image to celebrate what is called by some “The Battle of Lewisham”.

I would like to share this tee shirt, but it’s a personal DIY project not a commercial thing, so if you’d like one, I’d be really happy to print one for you, just send me two plain tee shirts and I will return one with the image printed on it for just the cost of postage.

Or , if you live in the borough then maybe we could meet and I can collect the tee shirts from you we can hang out! If you want to come over and join in printing, that’s cool too!

I have been buying tee shirts from charity shops, it means I’m not paying into some slave driving regime. Please don’t buy for this project directly from outlets if you’re not sure the workers are treated fairly . I’m aware that maybe some of the shirts I have been buying may have originally been made in bad conditions, but I am sure that when I buy them I am not funding such processes… It’s terrible that it seems the norm now that people are treated poorly, often working in dangerous conditions for a pittance and you have to go out of your way to find stuff made fairly…

If you really really can’t organise yourself and want to just buy one, then ok… Originally the tee shirts cost £2. I’m going to add £3 to that for labour (printing a single tee doesn’t take that long, and I’m into it, and would be printing for myself anyway) plus say £2.50 for postage… It might be less than that, but I haven’t checked. I think it should cover it…

Alternatively we could swap something… You make comix, zines or tees yourself? We better talk!

Option 1.  Meet up, gimme two tees and I give you one back with the print.

Option 2. Send two tees in the post and I’ll print one and send it back . Please include a pre-paid envelope.

So fill in the form and I’ll be in touch …I know it seems complicated but hopefully it’ll end up being a bit nicer than just buying a tee shirt from some faceless company! Also, there’s loads of stuff online about Lewisham ’77, this blog is pretty good. 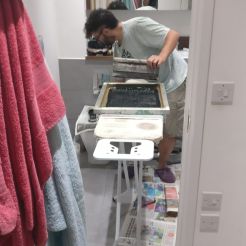 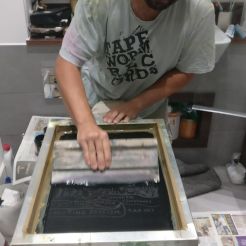